NDA appointment : A conflict of interest?

i Apr 22nd w No Comments x by rpayne

Nobody is disputing her personal abilities or competence, but the appointment of Lorraine Baldry as the new Chair of Sellafield Limited raises concerns about potential conflicts of interest within the geological disposal programme. 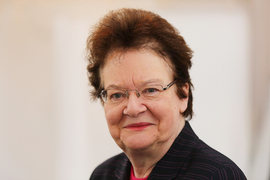 Baldry was also recently appointed Chair of the Radioactive Waste Management Advisory Council.  The Council is an independent group of experts who advise RWM, the GDF delivery body, on how to best progress the geological disposal programme.  RWM is a wholly-owned subsidiary of the Nuclear Decommissioning Authority (NDA) — Sellafield Limited is also a wholly-owned subsidiary of the NDA.  This means Baldry will be advising RWM on geological disposal, while also running the company which currently owns most of the waste destined for geological disposal and has a very vested interest in the GDF.

Potential conflicts of interest between the NDA and RWM were raised by Minister’s own independent expert advisors, the Committee on Radioactive Waste Management (CoRWM) in their most recent Annual Report in January 2018.  In their report they say:

“CoRWM remains concerned about the dependence of RWM on its parent body and is strongly of the opinion that a GDF delivery organisation should be separate from its major customer. The Committee also has concerns relating to the suggestions that consideration is being given to moving the SRO into the NDA. At this stage, CoRWM does not believe that the SRO should be located within the NDA because it represents poor governance and exposes the NDA to criticisms around conflicts of interest.”

The “SRO” is the ‘Senior Responsible Officer’ for the project, and currently resides in BEIS.  CoRWM are expressing concern that placing all authority in NDA as both the developer and prime customer of the GDF creates the potential for real or perceived conflicts of interest.

Baldry may well be the best person for the Sellafield job, but it begs the question whether it is still appropriate for her to to continue in her RWM role.  As the published responses to this week’s public consultations on geological disposal make clear, trust and transparency are critical to the geological disposal programme.  RWM and the NDA’s response to this challenge will reveal something of their understanding of how transparency helps build trust.